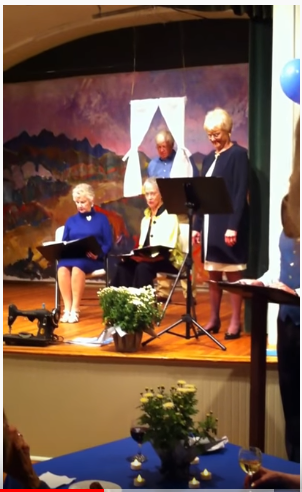 But do they sew?

Members of the Circle and their husbands answer this question.

To celebrate the Annisquam Sewing Circle on its 175th Anniversary a delightful evening was held in the Village Hall with delicious food and this entertaining skit.

Many small amounts accumulate to make a large amount.

What’s the origin of the phrase ‘Many a little makes a mickle’?

A mickle, or as they prefer it in Scotland, a muckle, means ‘great or large in size’. Apart from ‘many a little (or pickle) makes a mickle’ the words only now remain in use in UK place-names, like Muckle Flugga in Shetland (which amply lives up to its translated name of ‘large, steep-sided island’) and Mickleover in Derbyshire (listed in the Domesday Book as Magna Oufra – ‘large village on the hill’). ‘Over’ and ‘upper’ are very common prefixes in English place-names, along with their opposites ‘under’, ‘lower’, ‘nether’ or ‘little’. Examples of these are the Cotswold villages of Upper and Lower Slaughter, and the Hampshire villages of Over and Nether Wallop. The word ‘much’ derives from the Old English ‘mickle’ and has now almost entirely replaced it. ‘Much’ is also used in place-names like Much Wenlock, Shropshire (there’s also a Little Wenlock, of course).

The proverbial phrase ‘many a little makes a mickle’ has now itself been largely superseded by the 18th century ‘look after the pennies (originally, ‘take care of the pence’), and the pounds will look after (‘take care of’) themselves’.

Rita presented this talk at one of the Annisquam Sewing Circle monthly meetings. The Members were given pieces of paper to make ‘squares’ for an ASC 2019 Quilt. 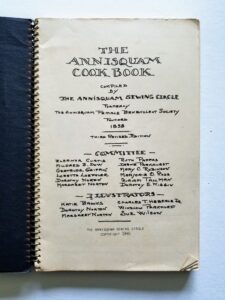 Yes, the Annisquam Sewing Circle is still going strong. You have a find there, but perhaps not valued much in your area. On the title page, you will see the names Margaret (Peggy) Norton and Dorothy Norton, both of whom we part of the well-known group, The Folly Cove Designers. The Cape Ann Museum has information on the ASC as well as the Annisquam Historical Society and the Commonwealth of Massachusetts archieves.
https://www.capeannmuseum.org/https://www.annisquamhistoricalsociety.org/https://www.digitalcommonwealth.org/search/commonwealth:3r077d35chttps://www.digitalcommonwealth.org/search/commonwealth:3r077d610Video presentation: https://youtu.be/oMyj4yjp9ds 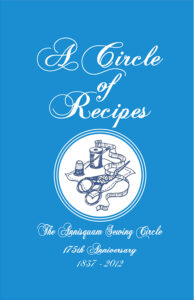 The Annisquam Sewing Circle published a much-loved cookbook in 1941 and another in 1945. The organization celebrated its 175th anniversary in 2012 and published another wonderful cookbook bound to be a cherished addition to the kitchen. “A Circle of Recipes” has over 400 recipes from the membership. It is out of print now.

This information might not be what you are looking for. If you have any questions, please let me know. I will try to locate the answers for you.

The Annisquam Sewing Circle has been reaching out to the community since its inception. Bags of groceries were left on the doorsteps of families in need. Hats and mittens were knit for soldiers during the Civil War and nippers for the Gloucester fishermen. Items were made for the ASC Christmas Fair which included little men out of toothpicks and raisins for children to buy as gifts for family and friends. The money raised went back to the community.

Times have changed but the needs of the community remain the same. The funds raised by the ASC are donated to Cape Ann Community organizations like Wellspring, Open Door, Backyard Growers, and Animal Aid as well as scholarships for GHS graduating seniors who are going on to college or other post-graduate training.

Send an email to FriendsOfASC@gmail.com to receive upcoming events and news of the ASC. Your email will not be shared with anyone. We value you as a Friend of the ASC and your interest in our activities. As a thank you for your interest and support of the Annisquam Sewing Circle, we will send you an ASC favorite recipe. 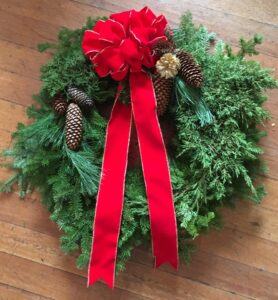 This year the ASC hopes to be taking orders for wreaths. They would be decorated with all-natural materials plus a bow.

If you would like to added to the “Wait List” for ASC wreaths this year, please snd an email: to: AnnisquamSewingCircle@gmail.com

Check back here for information on ordering! (Link to info from Bonnie & Stevie will be added soon) 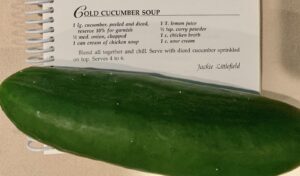 It appears that everyone’s cucumber plants are more bountiful than usual! Here is a solution for the overflow. Jackie Littlefield’s “Cold Cucumber Soup” recipe from “A Circle of Recipes by the Annisquam Sewing Circle, 175th Anniversary, 1857 – 2012”.

Pies, cookies, cakes and preserves—oh boy!   Plus flowers from the gardens of Annisquam!

Looking for some delicious homemade treats for the holiday weekend? Come to the special pop-up bake sale at the Annisquam Farmers’ Market on Friday, August 7, 9:00 – noon. The renowned bakers of the Annisquam Sewing Circle are cooking up all sorts of yummy sweets—fruit pies, brownies, cakes, and even some gluten-free temptations. While you’re at it, buy extra to freeze for later!

Mark your Calendar Friday, August 7, 9:00 – noon
(or as long as these goodies last!) Annisquam Farmers’ Market
36 Leonard Street, Gloucester
(between the Exchange & the Village Hall)

Payment by check or credit card

Pies and cookies and cakes—oh boy!   Looking for some delicious homemade treats for the holiday weekend? Come to the special pop-up bake sale at the Annisquam Farmers’ Market on Friday, July 3, 9:00 – noon. The renowned bakers of the Annisquam Sewing Circle are cooking up all sorts of yummy sweets—fruit pies, brownies, cakes, and even some gluten-free temptations. While you’re at it, buy extra to freeze for later!

Mark your Calendar Friday, July 3, 9:00 – noon
(or as long as these goodies last!) Annisquam Farmers’ Market
36 Leonard Street, Gloucester
(between the Exchange & the Village Hall)

Payment by check or credit card